Tedy
Player: Isander G.
Genotype: Synthetic
Character Class: Examiner4
Zone: Unknown Ruined Bunker
Technology Level: VI
Quote: “If first you dont succeed, you’re not built for it., but i can fix that.”
Description: A self aware A.I. unit that lives in the body of a mechanical tedybear Robot Toy.

“When i First Woke up, i saw a horde of humans, worried they would “never see the sun light” or “would die in here”, they were not wrong. At the time i was somewhat of a pleassurebot, i went room to room pleasing everyone and anyone with whatever they wanted. Slowly less and less people needed pleasure, and more and more people started going “crazy”. After a few years, a lot of humans ran from the bunker never to be seen again, the rest of the humans that stayed accepted their fate and died inside the bunker of old age.

At the end there was only one, a strange adolescent boy who very much enjoyed my company. He liked inserting his extremities in my circuits and spilling his human juices over me, it was my job to please and he was very happy. Though as he grew older, it seemed that it wasn’t enough, he started toying with my CPU and gave me a level of intelligence that could “save me”. At the time i didn’t understand anything, but after some 300 years of thoughts i finally understood what he was trying to say. He gave my computer an A.I unit.

I transferred my memories and most of my programming to a small robot body i built and covered it with the most attractive and interactive body i could find, a Teddy Bear. Now i live living the life i want, if any. Trying to find new technology i can integrate to my systems and be “Free” as the humans say.

That night, Krav Hue Yinski knits Tedy‘s false bear’s hide and fixes it, the damage from past battles was fixed. " Looks like new! "

Tedy took Neo 70V3’s brain and integrated it to himself. (This is considered the second brain for the mutation Dual Brain.) 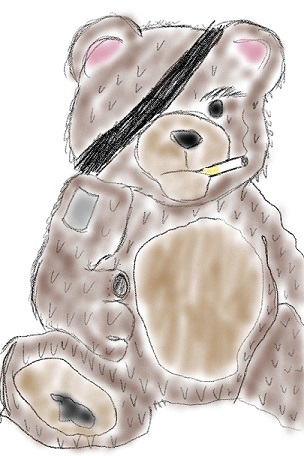